One of Melbourne’s quintessential experiences is to stroll its laneways, many lined with restaurants.  Smoking here would spoil things for everyone.

You can read reactions to this smoke-free pilot here.

Three more laneways were added in 2015.

Victoria’s Local Government Act 1989 permits local governments, including the City of Melbourne, to make and enforce “local laws” (see ss 3E, 111) that relate to its functions or powers, provided they are not inconsistent with Victorian Acts or regulations.

The City of Melbourne is currently reviewing community feedback about a proposal to make Bourke Street mall smoke-free.  See here, and here.

North Sydney Council has gone even further, voting in July 2019 to completely ban smoking in its CBD.

Community consultation showed 80% support in favour of the ban.

The traditional justification for second-hand smoke laws – in bars and restaurants, offices, trains and airplanes, is that smokers should not be permitted to harm the health of non-smokers.

With growing demand for fresh air, however, these laws have taken on a life of their own.

Area-wide smoking bans in public places are a logical follow-on from the decade-old smoking bans on Sydney beaches.

Manly beach went smoke-free in 2004, and all harbour and ocean beaches in Sydney’s northern beaches area are now smoke-free.

Bondi Beach also went smoke-free in 2004, and Waverley Council has since extended smoking bans to the Oxford Street Mall. 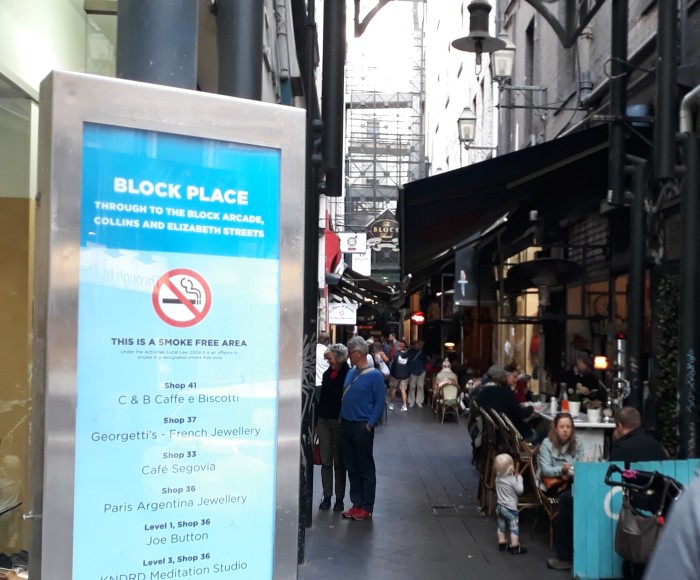 Second hand smoke controls reduce butt litter and harm to non-smokers, including asthmatics and others with lung and heart conditions.

It seems clear, however, that bans are expanding into areas where the risk of harm to non-smokers is substantially reduced.

It’s a process I call transformation: when the justification for existing legal controls changes over time as a result of norm change, facilitating further expansion.

These days, what functions do smoking bans serve?  Beyond causing harm to non-smokers, are they laws that relate to amenity – the desire of the majority not to have their enjoyment of public places spoiled by even transitory encounters with nasty tobacco smoke?

Or are they about reducing the potential for smoking to function as a socially communicable disease by reducing the visibility of nicotine-seeking behaviour?

Or are they about litter and protection of our waterways?  (I once saw a smoker put their butt in the bin.  Honest, cross my heart).

Or are they simply an exercise in “making tobacco use difficult” (to use Brawley’s term)?

Whatever the reasons, the nanny state theorists aren’t having a bar of it.

Residents’ demand for fresh air, and smokers’ recalcitrance on butt litter went down like “sick in a cup” with radio man Steve Price, who has blasted the ban as a “nanny state solution”.

Other ways in which tobacco controls can expand include through extension (where the purpose of the law remains the same, but the reach or intensity of legal controls becomes more extensive over time (as with prohibitions on tobacco advertising), and through creation (where law imposes distinctively new kinds of controls to help reduce initiation, encourage quitting, discourage relapse, and reduce exposure to second-hand smoke).

A similar trend towards smoke-free streets and precincts looks to be under way in parts of asia.

From 1 January 2019, the Orchard Road precinct in Singapore became a smoke-free zone.

Smoking has not been eliminated entirely along Singapore’s famous shopping strip.  But smokers are required to smoke in designated places, reducing litter, and further reducing non-smokers’ exposure to tobacco smoke in outdoor areas. 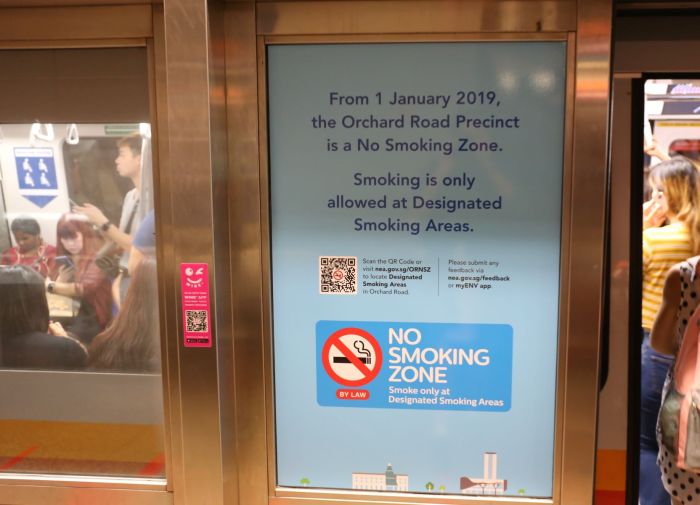 In the United States, Disney World and Disneyland are going smoke-free, and there are no designated smoking areas within these parks.

Not all tobacco control advocates are comfortable with the trend towards smoke-free public spaces.

Simon Chapman has argued that “banning smoking in wide-open public spaces goes beyond the evidence and is unethical”.

One interesting possibility is whether the failure to accommodate smokers’ nicotine addiction constitutes discrimination on the grounds of “disability” or “impairment” under NSW, Victorian and other anti-discrimination or equal opportunity statutes.

While opioid addiction has been considered a disability under the Disability Discrimination Act 1992 (Cth) [see commentary here], nicotine dependence has not yet been regarded as a “disability” or an “impairment” for the purposes of State anti-discrimination laws (see here, and here).

I’m not sure tobacco companies want all their addicted customers categorised as disabled, but you never know.

In the meantime, enjoy the fresh air! 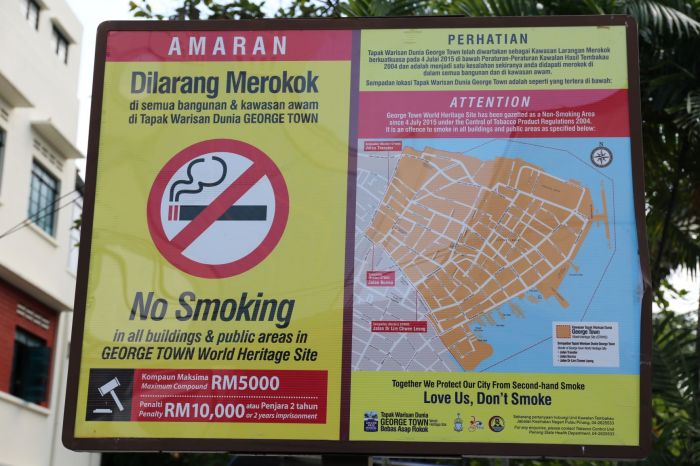