Skip to content
HomeBundaberg Rum and Dora the Explorer: the reality of alcohol advertising in Australia

My 3-year old daughter loves Dora the Explorer.  She thinks that bossy little know-it-all, Dora, is really cool.  She used to be frightened of The Swiper, but that changed as she grew older.

Last night, I sat her down in front of a laptop and let her watch an episode of Dora on YouTube.  Right away an ad filled the screen for Bundaberg Rum.  Bundaberg Rum is a brand owned by Diageo Australia.  All of this happened mid-evening, before 9pm. 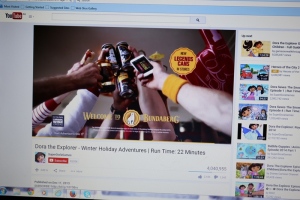 This is the reality of alcohol advertising in Australia.  Liquor ads, bought and paid for by Australian drinks manufacturers, streamed online with children’s content.

This is the kind of thing the Alcohol Advertising Review Board draws attention to in its latest report.

A product review by a 12 year-old for Vodka Cruiser Pineapple Passion Punch 2L, on the Dan Murphy website (owned by Woolworths). Johnny Walker and Smirnoff ads screened in cinemas  before “Minions” – an animated film, rated PG.  Alcohol ads plastered over bus stops outside schools (see p 17 of the report).  And so on.

If you don’t want your pre-schooler exposed to liquor ads while watching age-appropriate material online, what are your options?

First stop: The Alcoholic Beverages Advertising Code (ABAC).  According to ABAC, “The ABAC Scheme is the centrepiece of Australia’s quasi-regulatory system and is administered by a Management Committee which includes industry, advertising and government representatives.”

The ABAC Code places few real constraints on signatories, but it enables the alcohol industry to claim that alcohol advertising is regulated responsibly, at no cost to government.  Which would be great, if it were true.

The ABAC Code places no restrictions on the placement of an alcohol advertisement.

If you’re a drinks manufacturer who wants to advertise on the internet – including on websites that carry or are even devoted to children’s content – the ABAC Code has no problem with it.

For example, when Crown Lager ads appeared on a “Bratz” games website (and check out the URL to see what I mean ), the complaint was dismissed  because the ABAC Code was designed not to apply to the placement of alcohol ads.

An independent complaints scheme, the Alcohol Advertising Review Board, points out the limitations of the ABAC, and administers its own Codes, with help from a panel of lay members located around the country.

As a parent, those constraints appear entirely reasonable to me.

By the way, you have to love the “Drink Wise” logo in the second screen shot above.  You probably missed it.  After all, it was designed to be missed.

A Fairfax video reporting on this blogpost, containing the images included in this post, has now been added to YouTube.

AdNews has reported that Diageo has suspended all media across the YouTube platform while it investigates the matters raised above.

This incident provides an interesting opportunity to test the limits or otherwise of the ABAC Code.  Accordingly, I have submitted a complaint.

Are you interested in studying health law?  For further information on Sydney Law School’s Master of Health Law and Graduate Diploma programs, follow this link.

10 thoughts on “Bundaberg Rum and Dora the Explorer: the reality of alcohol advertising in Australia”