The Chief Adjudicator of the ABAC Complaints Panel has ruled that the Panel will not consider a complaint about Diageo Australia spamming a 3 year-old with a Bundaberg Rum video-advert when she clicked on a Dora the Explorer video on a children’s YouTube channel.

The decision by Chief Adjudicator the Hon. Michael Lavarch AO confirms that otherwise unobjectionable alcohol advertisements do not breach the ABAC Code simply because they appear on children’s websites. 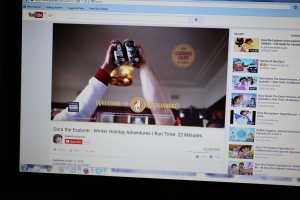 I made the complaint to ABAC in September 2015 after the ads shown here appeared on a Dora the Explorer YouTube channel.

Inexplicably, the Advertising Standards Bureau lost the complaint for 3 months, but finally found it again and forwarded it to Mr Lavarch.

Mr Lavarch’s letter can be found here.  He wrote:

Mr Lavarch wrote that the complaint would “not be referred to the Panel for a determination as it raises only the issue of placement of an alcohol marketing communication rather than its content”.

In explaining his decision, Mr Lavarch referred to a previous determination of the ABAC Panel in 2012 (complaint 118/11)  where the ABAC Panel dismissed a complaint about an ad for Crown Lager appearing on a children’s website aimed at 3-8 year olds.

Despite not forwarding the complaint to the ABAC Complaints Panel, Mr Lavarch indicated that he would raise the complaint with the ABAC Management Committee for consideration.

In my view, this is a test for the integrity of the Management Committee, which is dominated by alcohol and advertising industry associations.

Why did a Bundaberg Rum ad run on a toddler’s YouTube channel?

Mr Lavarch indicated he had made inquiries of the advertiser (Diageo Australia) about how the Bundaberg Rum ad came to be running on a YouTube channel devoted to young children’s content.  This is where it gets interesting.

…Google thought you were an adult

Mr Lavarch’s letter conveys the advice of Diageo that “YouTube only serves this advertiser’s advertisements to users who are logged in to the Google platform that are aged 21+”.

I take this to mean that in Diageo’s view, I was logged into Google, and Google (which owns YouTube) assumed that the relevant YouTube channel was being accessed by an adult.

Even so, why should that make a difference?  Many computers used by children will be logged into Google or YouTube 24 hours a day.  Wouldn’t it be smarter for alcohol advertisers to keep away from children’s content, and to limit their alcohol advertising to websites that are age-restricted to adults?

Would Google/YouTube and its advertisers rely on the same arguments (you were logged into Google, so Google thought you were an adult) if advertisements for sex services were streamed on YouTube channels devoted to children’s content?

…You were accessing an unauthorised or pirated video

Mr Lavarch also relayed  from Diageo that “it seems that in this case the video was not an authorised, licensed, or verified video on YouTube and therefore YouTube would not have identified it as children’s content.”

This argument strikes me as self-serving.  As the photos on this blogpost illustrate, the Dora video in question was hosted by Super Dora Games, a YouTube channel with >62,000 subscribers and more than 54 million views.

Check it out.  Is it really so unreasonable to expect ABAC to hold Australian alcohol advertisers accountable when they advertise on sites like this?

This isn’t the shady backrooms of the internet, and I do not accept that children’s content websites should be fair game for alcohol advertisers.

Diageo’s assertions are not entirely consistent with advice received from the office of the Hon. Mitch Fifield MP, Minister for Communications, reported in an earlier post.  Google advised the Department that:

“[U]nfortunately [Diageo’s advertisement] was not correctly labelled as an alcohol advertisement, and Google’s other measures to identify inappropriate advertising content did not pick it up”.

The “other measures” comprise the following:

So what really happened?

It’s difficult to know.  At the end of the day, Diageo Australia spammed a 3 year-old watching content appropriate for toddlers, but that doesn’t even breach the voluntary Code that Australia’s largest alcohol companies, hand on heart, have pledged their allegiance to.

Plugging the holes in the cheese

Mr Lavarch’s letter conveyed advice from Diageo Australia that the following measures have been implemented by its media partners (Google/YouTube?) to prevent similar occurrences:

The photos you see above illustrate that spamming children with liquor advertisements on children’s content websites is a real issue, not a hypothetical one.  In my view it would now be appropriate for the ABAC Management Committee to plug one of the holes in the ABAC cheese and to include a provision that prohibits Australian alcohol advertisers from advertising alcohol to children who are accessing age-appropriate content online.

The Alcohol Advertising Review Board, an initiative of the McCusker Centre for Action on Alcohol and Youth and Cancer Council WA, administers a voluntary Placement Code that includes the following provision:

“Alcohol Advertisements shall not appear online in connection with content that appeals or is likely to appeal to Young People.”

The alcohol industry could only object to a provision like this if it was unwilling for its members to be held accountable for spamming children and adolescents with alcohol advertisements when they are accessing material online that is of particular appeal to them.

If Diageo and other advertisers have taken steps to ensure that something like this won’t happen again, then they shouldn’t have any problems with updating the ABAC Code accordingly.

Unfortunately, Mr Lavarch’s response illustrates that at the present time, complaints about alcohol advertising to children – to the extent that they raise the issue of placement – are being invisibly eliminated from the ABAC complaints system, confirming the impression that there is no problem to begin with.

Complaints like mine no longer make it through to the full Complaints Panel.

If a purely voluntary code is the best way of regulating alcohol advertising in Australia, then it’s time for the Management Panel to amend the Code so that advertisers are required not to advertise in connection with content that appeals or is likely to appeal to young people.

Is the ABAC Management Panel just a club dominated by alcohol and advertising interests, or can they act in the public interest to protect children from alcohol advertising?

We’ll see.  This issue may have a while to run yet.

In the meantime, the Royal Australasian College of Physicians (RACP) and the Royal Australian and New Zealand College of Psychiatrists (RANZCP) has released a new alcohol policy which is strongly critical of Australia’s current regime for alcohol advertising regulation – including the ABAC Code.  The recommendations about alcohol advertising are worth quoting in full:

“Recommendations:
1. That the current self-regulatory approach to alcohol advertising in Australia and New Zealand should be changed to include statutory restrictions, including the enforcement of costly sanctions for breaches of the advertising code.
2. That the sponsorship of sporting events by the alcohol industry should be prohibited in Australia and New Zealand as a first step towards a model of alcohol advertising regulations which would phase out all alcohol promotions to young people.
3. That the Australia New Zealand Food Standards Code should be amended to introduce mandatory warning label requirements for alcoholic beverages, with specific guidelines on the placement, size, colour and text of the label so they are visible and recognisable; and a strict timeframe put in place for its comprehensive implementation.”

Are you interested in studying health law?  For more information about our Master and Graduate Diploma in Health Law, click here.